We are all aware that accidents can happen. Many of us that maintain and manage several Twitter accounts through services such as TweetDeck or HootSuite have either done it or ALMOST done it. The “done it” I speak of is the accidental crossing of the business/personal Twitter line.

Personally, I once responded to a client’s @mention through my own personal account, resulting in a rather confused individual, but hardly a crisis. We joked it off, he and I, as an example of improper morning caffeine levels and then we moved on.

It isn’t always so easy though, because sometimes the comment isn’t something that can be laughed off. Imagine the most offensive Tweet you could  accidentally put out there into the Twittersphere, okay, now make it much worse than you imagined and accidentally send it. What then?

“@KitchenAidUSA: Obamas gma even knew it was going 2 b bad! She died 3 days b4 he became president”

Twitter exploded within seconds of the offensive tweet making its way from the KitchenAid account and while it was deleted within a few minutes, the damage was done.

Huffington Post, Mashable, AdWeek … all had posts live within 10 minutes of the meltdown. Surely KitchenAid was about to hit a firestorm like no one in Social Media has seen in quite sometime. The degree of catastrophe lays not just in the post’s offensiveness, but in the highly personal level to which it was offensive to a family and to OUR president, and regardless our leanings, even the “right” will stand by and call foul on this one. But maybe it wasn’t.

There are 4 Keys to Great Crisis Management

The actions taken by Cynthia Soledad, Sr. Director of KitchenAid Brand, in the minutes, then hours, that followed the Obama tweet, showed intelligent leadership.

Her willingness to step in front of a moving train and try to divert a larger collision is impressive. 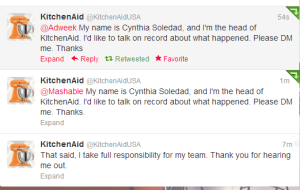 I think she has potentially turned a disaster of epic size into an opportunity for dialogue. Businesses big and small, across multiple industries, are able to use this as a terrifying example of that imagined worst tweet scenario and learn from it. When the rest of the world wakes up and runs with this, I may think differently. While tonight is going to be a very long night for Cynthia Soledad, I honestly believe that her actions in the first few hours of the crisis have already begun to put out the firestorm.